Sandy Rosenthal founded the non-profit Levees.org in 2005. The group’s focus is educating the public that the flooding of New Orleans during Hurricane Katrina was due to federal engineering mistakes, not the wrath of nature.

Her book, Words Whispered in Water, is about how––against all odds––she changed the national narrative about the flooding disaster.

In March of 2019, Rosenthal unveiled the Flooded House Museum at a major breach site. She initiated the installation of three historic plaques vetted by the state’s preservation office, hosts an annual levee breach bike tour, and much more.

For those efforts, Rosenthal has been honored with numerous awards most recently including Outstanding Social Entrepreneur of the Year from Tulane University and Most Influential Woman from Mount Holyoke College. Rosenthal is an advocate for 63% of the American population living in counties protected by levees. Rosenthal has been married to Stephen Rosenthal since 1979, has three adult children: Aliisa, Mark, and Stanford and one granddaughter, Ellie. She also has two small dogs named Twinkie and Cupcake.

Being the David in a World of Goliaths

With corporations getting ever larger – and even able to influence the outcome of presidential elections – the power of a single individual might seem lost. But it’s alive and well. Your attendees will learn how, with minimal resources, to harness the energy of outside experts and mobilize citizen participation to accomplish short term goals.

Words Whispered in Water
The catastrophic flooding of New Orleans 15 years ago brought levees into the public conscience. Yet, flooding now seems to be happening almost everywhere. The majority of the nation’s population lives in counties protected by levees. This is an eye-opening talk pulling from Sandy’s personal experience and part of what she shares in her book by the same name. Your audience will learn why all this flooding is occurring, what it means, and what they can do to stay safe.

If you’re a small business or a community-based group making the world a better place, you will likely face opposition in the form of a “grassroots group.” But the majority of these are fake – created by elite consultants working for wealthy people or corporations. In this presentation, you will learn how, with shoestring resources, to recognize the fake grassroots group and to pull back the curtain to expose it.

“We enjoyed Sandy’s captivating presentation. She was prepared, had great media support, and told an interesting and fascinating story. We highly recommend her for your next function.”
~ Craig Stuart Adams, President, Golden Gate Breakfast Club

“Thank you so much for your time and your presentation to East Sacramento Rotary. Very enlightening. Your advocacy in the area of levees is much appreciated. Your results have a direct effect on those of us living with levees, especially in the Sacramento area. I’m always touched by how one person’s passion can have such a positive impact. Thank you!”
~ Maria Mengotti, President, Rotary Club of East Sacramento

“Sandy is well versed regarding the levee system in New Orleans. Our biggest takeaway was people should not be afraid to ask questions at any level of government.”
~ André Lewis, Program Chair, Rotary Club of Benicia

“Sandy’s work is totally inspiring. Her presentation is interesting and spoke of her passion for accountability and seeking change and progress.”
~ Alice Lai-Bitker, Program Chair, Rotary Club of Alameda 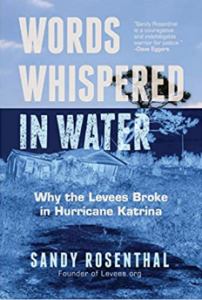 Early Praise for Words Whispered in Water: Why the Levees Broke in Hurricane Katrina